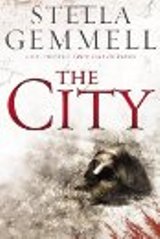 An End to the Never-ending War

One part battle narrative and one part political labyrinth, The City is a multi-layered Romanesque fantasy epic. The Emperor of the City has reigned for as long as anyone can remember. He has lost touch with reality and no longer cares what the costs of war are, so long as the City wins. The population is rapidly dwindling as hundreds die outside the City’s walls every day. Both sides crave an end to the bloodshed, but the war will not end until the Emperor is dead, or all the City’s citizens are slaughtered.

“That broken sword is the only thing keeping you alive, sir. What did that damn fool know? That sword was keeping him from battle. His men needed him now and he would not let them down”

The City has a large cast of characters, and flits between them to weave a complicated narrative, showing the decay and corruption in the City. The large cast may be confusing to some, but it allows the story to be told on many fronts; from the basest soldier on both sides of the conflict, to the Emperor himself. The many battle scenes are skillfully written, bloody and violent as all battles are. The pacing of the narrative can be slow at times, and it can be difficult to follow because of the unannounced time jumps. A book to take your time with, The City has much to offer.