The Cuban Connection: Nixon, Castro, and the Mob 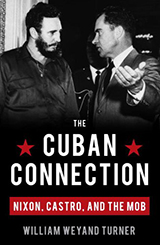 Author William Weyand Turner does a masterful job of showing the reader why the Castro revolt was inevitable and how those in power in the United States continually bumbled any attempt of Cuba to work more closely with their northern neighbor. In 1959, after taking control of Cuba and kicking out the mobsters, Castro toured the US and asked to meet with President Eisenhower who refused and told Vice President Nixon to meet with him instead. The meet did not go well. Upon leaving the meeting Castro was heard to say, “That son-of-a-bitch Nixon, he treated me badly and he’s going to pay for it.” But let’s not get ahead of ourselves. Cuba in the 50’s was the play ground of the rich and controlled by a long list of mobsters, con men and outright criminals. The names are familiar; Charles “Lucky” Luciano (the boss of bosses), Bugsy Siegel and Meyer Lansky. It was a wild time and very few of the Cuban people were being allowed to participate in the freewheeling environment of booze, drugs and sex.

“The upshot of the revolution for the mob was that virtually all Havana’s criminal class – Cuban gangsters, hit men, drug traffickers, Batista remittance men, shakedown artists, and pimps – migrated to Miami.”

The book continues to outline the numerous attempts the US made to either assassinate Castro or take over his government. In the 1960’s our deteriorating relationship with Cuba sparked the Bay of Pigs disaster planned by President Jack Kennedy to Operation 40 which was another disastrous attempt to kill Castro. All this lead to the Russian missile crisis in 1963 that nearly started World War Three. Other attempts by the US government to assassinate Castro include; lethal cigars, planting exploding seashells in a scuba diving site, a gift wetsuit impregnated with noxious bacteria and poisoning his food. The sheer ineptitude of the attacks on Cuba and the Cuban government boggle the mind. The book is fascinating and an interesting reading.