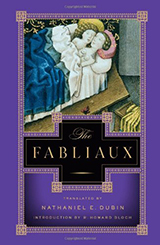 For anyone who enjoys Geoffrey Chaucer’s The Canterbury Tales, The Fabliaux translated by Nathaniel E. Dubin will doubtlessly please, although these French medieval comic tales are far more scandalous than their English cousins. The fabiliaux, or fables, are written in verse by a variety of minstrels who don’t give a fig about literature, but instead intend to entertain with bodily comedy – somehow fart and sex jokes have always been found humorous – and trickery.

“The fabliaux are a key to the habits of the common people of the High Middle Ages, to how men and women worked, traveled, ate, bathed, slept, made love, eliminated, wiped their posterior parts, dressed, arranged their hair, made up their faces.”

With Dubin’s superbly playful translation, these are both fascinating from an anthropological standpoint and amusing. Misogyny abounds, but it’s so old and over the top it’s more interesting in a historical context – how far we have come since then and how far we still have to go – than offensive. The excellent binding, beautiful hardback cover, ribbon bookmark and parallel Old French text make this book a great addition to a library or a gift to a Middle Ages scholar, a Francophile or anyone who loves short, fun and dirty poetry.