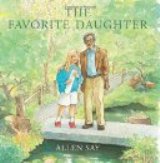 Yuriko is a unique little girl living in California. After a stressful day at school when her new teacher mispronounces her name and classmates make fun of her baby picture, Yuriko wishes she was more like everyone else. She tells her father that she wants an American name, like Michelle.

Yuriko tells her father about an art project she’s been given to create something to do with the Golden Gate Bridge. During the weekend Yuriko’s father shows her a bit of her heritage by going out for sushi and visiting the Japanese gardens at Golden Gate Park.

As she begins to create her project, Yuriko considers doing a drawing of the bridge, like her classmates, but instead creates something entirely unique, like herself. In the end, she signs the artwork with her name, Yuriko.

The book The Favorite Daughter is based off of author Allen Say’s personal experience. The story is a lesson for children who are in the tough stage of wanting to fit-in, but also wanting to embrace being individuals. Say’s watercolor illustrations are detailed to add depth to the story, while the simple dialogue makes it accessible to children between the ages of six and 10.