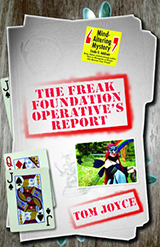 Something a Little Bizarre – Just for Fun

The Freak Foundation Operative’s Report is a bizarrely constructed, enjoyable romp through a fantasy conspiracy theory. The town of Batley Pennsylvania is under attack from a masked and violent group calling themselves The Slain. While the citizens of Batley are increasingly terrorized, a small group of people fight against The Slain and their influence, piecing together information dating back from a previous attack fifteen years ago. Is it really a group of ancient god worshiping maniacs, or is there something more nefarious going on?

The Freak Foundation Operative’s Report can be confusing starting off as the author and the publisher pop in as characters adding “helpful” notes, and the chapters often take place during different times (the previous attack and the current one) and are narrated by different people with little segue or warning. Despite this, the story itself is very engaging, and speckled with fantasy and horror elements the whole way through. The connected reports slowly build a much larger story involving a shadowy organization, brainwashing, drugs, mystical retreats, circus acts, scotch, and murder. While the strange organization may turn off some readers, The Freak Foundation Operative’s Report is perfect for those readers looking for something a little bizarre.