The Misadventures of Fink the Mink: Playground Troubles (Volume 1) 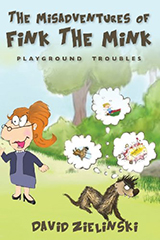 The Misadventures of Fink the Mink was an odd publication considering the style in which the book was written. The intentions of this children’s book are unclear unless one reads the back of the book first or reads the moral of the story that does not become entirely clear until the last page. Given that this book is intended to be a didactic way to learn about playground edict, it would be nice if the characters in the book were more fun and relatable.

For one it was odd that the main character is a mink even though all of his classmates are human – why did the author chose a mink as the poorly behaved classmate? In addition to this, the illustrations appear to be unfinished and unprofessional even though it claims to have “double number of illustrations of other books like it” according to the book’s promotion. The main character is not visually appealing at all – a messy and rather gross looking mink that is constantly frowning.

Children respond better to positive reinforcement; this is a book of what children shouldn’t do on the playground, rather than what they should do.