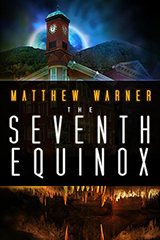 Bessie Henderson is recently divorced, vulnerable, lonely and is running away from her previous life. On the way, she has a car accident in a small Virginian city of Augusta. While she waits for her car to be repaired, she is charmed by the city’s Victorian architecture and unexpectedly buys a house. Suspecting that a big house built in 1885 that is filled with secret passages could be haunted, she is a little afraid. However, she isn’t disappointed.

Bessie finds underground caverns in her basement the day after she moves in. She also finds an injured man who is hiding from the police. She considers calling the authorities but hesitates. Bessie is persuaded by several people to help the escapee. Bessie’s neighbor, an elderly eccentric woman, is convinced that he has a good aura. The other, a young African-American boy, is also in trouble with the police.

“And to think that a few days ago, she’d been living a normal life, never suspecting real magic existed—or that people like Robin weren’t just fairy tales.”

Bessie helps the fugitive because she is attracted to him. She has been captivated by his perfect features from the first moment she saw him. It isn’t surprising that Robin Goodfellow is so handsome. He is actually a demigod. His real name is the Hunter. What brought him to the pastoral Shenandoah Valley?

According to author Matthew Warner’s legend, Robin Goodfellow must carry out a ritual Hunt by the spring equinox. If he doesn’t, the planet will be destroyed. Robin has spent a long seven hundred years in search of his rival and has ended up in Augusta. There are only three days left until the spring equinox and Robin has been severely wounded. Moreover, he has found out that his prey is too big to be killed in a conventional way. But this is the Hunter’s last chance to save the world.

You need to read the entire book to find out how Robin and Bessie’s mutual attraction helps Robin accomplish his mission. Most of the narrative is very original and this is a fine book.