The Shadow King: The Bizarre Afterlife of King Tut’s Mummy 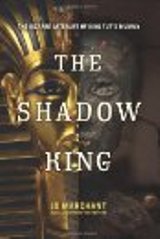 “…he’s ultra-famous, yet we know so little for sure about him.”

Indeed, what do we know about legendary Egyptian Pharaoh, Tutankhamen? This is the main question that Jo Marchant, award-winning science writer, discusses in her latest book The Shadow King. Probably no one from the millions of people who heard about, or went to King Tut’s travelling exhibition, ever consciously acknowledged that Tut’s mummy never actually left Egypt since his tomb discovery by archaeologist, Howard Carter and Lord Carnarvon in 1922. He wasn’t even on display for visitors until November 2007. However, there is a lot of mystery and disagreement about the King himself and his famous mummy: who were his parents, what is the cause of his death, did he have children, and was he cripple inbred (there is some evidence that perhaps his parents were siblings) or an active victorious military leader, etc.

The sudden death of Lord Carnarvon from a mosquito bite soon after King Tut’s tomb discovery started the curse theory that was supported by Sir Arthur Conan Doyle, the author of Sherlock Holmes. Scientific studies of Tut’s and other mummies have never stopped but show controversial results. Different researchers interpret the same facts, CT scans and DNA test differently. Who can we trust? You’ll find all about it in this scrupulous book.