The Titan: The Unproduced Screenplay 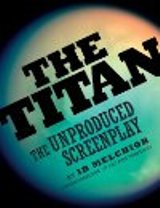 In the not too distant future, human civilization is on the verge of complete collapse. The Earth’s supply of natural resources is nearing total depletion, and the planet’s only hope seems to lie in finding Utopi-Fuel, an extraordinary power source from Titan. Furthermore, when fears emerge about the sanity of the cybernetic organism – the cyborg – created to infiltrate the native people of Titan, NASA agent Gary Ransom must journey to Saturn’s largest moon to avert humanity’s cataclysmic demise.

“We are near the end result, Mr. Ransom…In a short while the Cyborg will be on his way to Titan.”

The Titan is a mostly well-written screenplay in which Melchior employs some vivid and remarkably descriptive language. Unfortunately, the screenplay’s story suffers from a disappointing lack of character development. There are just so many characters that there is barely enough room to allow any of them to be focused on or fleshed out. Hence, they mostly come off as shallow stock characters with the notable exception of the compelling silent Titan leader, Mortak. Despite this, most B movie enthusiasts will assuredly enjoy The Titan, as will most science fiction fans simply interested in a quick and action-packed read.