The War Inside: Book One in the Horizons Trilogy 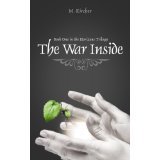 A Nice Start to a Dystopian Trilogy

Life in the Valley is hard and Thea knows that the only person you can count on is yourself. When she starts having vivid dreams directing her to save a teenage girl, Thea initially ignores them. The dreams are persistent, though, and Thea soon finds herself going to the forest to save Viv, the injured girl. Viv has a secret glow where her heart should be and a deadly infection. Thea realizes that Viv will die without medicine. This is something that does not exist in the Valley. She must join forces with a boy named Caden to go in search of The Stronghold, a city they have only heard about. Along the way they meet Rain, another teen looking for something more. It becomes clear that they are all part of something larger and are caught in a battle between the good and the evil in the universe. Each person will have to ultimately decide whether to take up their destiny in the fight for earth.

The War Inside:  Book One in the Horizons Trilogy is the characters. All four of the main characters are nicely written. The heroine, Thea, stands out because she is smart, wary and has a caring heart. Her relationship with Caden is fun and lively. Both of them are attracted to the other but they resist that attraction. Her sisterly relationship with Viv is touching and increasingly warm as the book goes on. The supporting characters, Enoch and Naomi, are more forgettable and generic. They have their purpose in the novel but may not have as big an impact on the reader. The concept of the book is a good one and a nice take on the typical hero-quest tale. The idea that the human race can lose touch with their empathy and love is an intriguing one.