Tower: An Epic History of the Tower of London 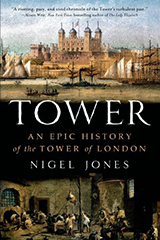 “Behind them on the torn ground lay the hacked bodies of England’s last Saxon king. His body was so slashed and battered that only his mistress could recognize it by intimate ‘certain indications.’” begins Nigel Jones, historian, biographer, and journalist, as he describes the Duke of Normandy’s successful invasion of London in 1066 and the beginnings of the Tower that served as a royal residence as well as a prison during Medieval times.

Jones’ graphic and almost gleeful depiction of the Tower’s bloody past with its constant jockeying of power, bloodshed and gore of Medieval England, becomes a woeful encyclopedia of savagery. Plotters against the crown, (which were many) were denied a swift beheading, “At Oxford, Sir Thomas Blount was hanged, cut down while still alive, and revived, his abdomen was slit and entrails drawn out and burned as he watched the grisly proceedings while seated on a bench.”

If the reader can stomach sordid ventures, there are fascinating details of early menageries at the tower beginning during the reign of Henry I, 1100-1135-until 1835. These animals included: leopards, lions lynxes, camels, elephants, eagles, and even a polar bear that was allowed to fish for salmon in the Thames. Many of the tower victims entering and exiting the tower would hear the squawks, shrieks and roars of animals. Unfortunately, most of these animals died either of neglect, tiny cages, or insufficient food.

Wedged inside the appendix of the book, Jones concedes in the existence of ghosts because the…“tragic, momentous, and violent events carry a charge.” One of the most famous victims of violence at the tower are the “little princes” who make their ghostly appearance dressed in white nightshirts and weeping softly.”

Five restricted stars, only for readers with the bravest of hearts, who will be rewarded with one of the most entertaining and grisly epic histories of the Tower of London.