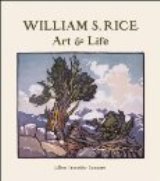 Even though some people might not recognize William S. Rice’s name, they will recognize his work. Rice was an artist who lived in California at the turn of the 20th Century and made wood block prints. Rice popularized this relativity inexpensive process of creating art while his work became collectible for home owners. He created prints of famous and familiar places.

This book brings to life the story of this remarkable individual and how he became an artist. He started off studying art as a practical tool so he could draw pictures for newspapers and magazines. He moved to California to teach art in schools and create art in his spare time. He became prolific in creating his own wood block print process. While he is not as well known as other artists, mostly because of the rise of modern art, his pictures are a joy to look at. People who enjoy American art will appreciate this book and might even recognize a picture or two.