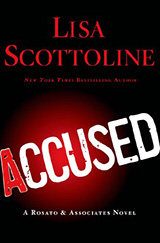 In the conference room, as the attorneys at Rosato and Associates celebrated Mary being promoted to partner, their receptionist stuck her head in and announced that someone named Allegra Gardner had arrived asking for a lawyer. The news stirred excitement, as the Gardners were a very wealthy, powerful family, and could bring tremendous future business to the firm. Allegra turned out to be a thirteen year old genius with a trust fund and an obsession about the murder six years earlier of her older sister. She was convinced that the wrong man had been convicted of the crime, and wanted to not only free him, but find out who really killed her sister. Reluctantly, Mary and Judy began looking into the matter, never suspecting that it would lead to a series of stunning events that included an attempt on Mary’s life.

Lisa Scottoline is a New York Times bestselling and Edgar Award-winning author of 21 novels. She has served as the president of Mystery Writers of America, and her recent novel Look Again has been optioned for a feature film. She has 25 million copies of her books in print in the U.S. and has been published in
thirty countries.

One can almost hear the cheering from Scottoline’s fans, including this reviewer, upon learning that the charming and often amusing ladies of Rosato & Associates have returned. Their personalities and antics burst from the pages, leaving readers wanting more.