Apocalypse Not: Everything You Know About 2012, Nostradamus and the Rapture is Wrong 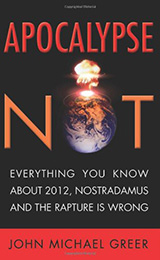 Finally, We Can Relax

The Author, John Michael Greer, has set the record straight on one of the most durable ideas of all time. And done it with an interesting and readable book that explains the origins of the “Apocalypse Meme“, and follows its twists and turns through the millennia.

Starting with Zarathustra, around 1500, history has been punctuated by prophesies of the end of History followed by utopia. Many, but not all, revolve around the return of Jesus, and the rapture. The most recent episode was the end of the Mayan calendar on December 21 2012, which would result in the end of the world but with, as far as we know, no utopia to follow. As we now know, it didn’t happen; which is kind of the theme of this book.

Mr. Greer brought considerable scholarship to bear, tracing the source and transmission path of the meme from astronomy to the many, many, different calendars that point to galactic alignments, the precession of the seasons and other ideas which again confirm that the ancients weren’t stupid and had observed the seasons and the night skies to help order their world, and sometimes to confound it. That these ideas were connected to end of the world scenarios is explained by the psychology at work. From the base: “The desire of some to pursue their dreams of heroic struggle in a world gone mad,” to the more general desire of a meme that “promises a future in which they will be proved right, and everyone who disagrees with them will be forced to admit the error of their ways.” And, finally, a shortcut through which their dismal lives will be transformed overnight without all the hard work that real transformations require.

I liked this book, and I recommend it wholeheartedly for its shedding light on a fascinating subject.