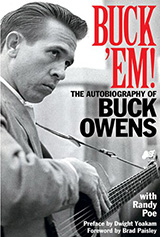 Co-author and editor Randy Poe put this fascinating autobiography together from nearly one hundred hours of Owens’ tape-recorded reminiscences. He then added interviews with fellow musicians, family members, and long-time friends. Buck Owens never made it through high school, but he turns out to be a thoughtful and intelligent musician who became a superb businessman. As Poe relates the tale, almost everything Owens touched turned to gold. One of the first people to own his own music publishing rights, Buck also made considerable money through signing other writers, notably Merle Haggard. He owned and operated radio stations, and even a disastrous foray into television turned into a gold mine when Univision bought the station at a huge profit. He also worked out a deal with Capitol Records where the master recordings of his albums and singles eventually reverted back to his own ownership. Along the way, he basically thumbed his nose at the Nashville establishment, recording and doing his business out of his Bakersfield, California home. Part of his discomfort with the country music, establishment, was his role on the Hee Haw TV show.  Buck makes no bones about his dislike of the show’s turning country music into a country music version of a minstrel show. He’s equally frank about the fact that he did it for the money.

The book has many tales and stories about Buck and his fellow musicians. I was incredulous at discovering that in his early performing days in Bakersfield, Buck did eleven-hour shows seven days a week, playing without breaks. From his early years as a sharecropper, to grinding out those endless shows, Buck picked up stagecraft and songwriting skills, enjoying twenty one #1 hit country songs. Guitarist, fiddler and harmony singer Don Rich was the key member of Owens’ band, The Buckaroos. When Don died in a motorcycle accident in 1974, Buck’s musical world fell apart. The loss of his best friend and musical partner eventually led him to leave the business, returning to perform and record with Dwight Yoakam.

Randy Poe provides a depressing postscript to Owens’ own story. Afflicted with various illnesses, Buck turned to multiple prescription drugs, and became seriously addicted to them. His only long-term marriage collapsed, his performances were limited by a stroke, and he died at the age of 77 in 2006. The book’s chapters are short, and easy to read. This book is a fascinating tale about an amazing performer.