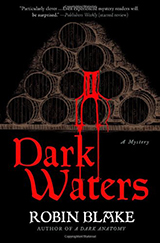 An Entertaining Historical Mystery of Murders, Political Intrigue, and Conspiracies

Dark Waters is an immensely enjoyable novel by British author Robin Blake. It pulls the reader into the past, and into the life of Titus Cragg, an attorney who also acts as coroner for his county. The story opens as the body of a drunken innkeeper is discovered in salmon traps in the nearby river. The case is determined to be accidental and is closed, but questions arise when there is another death, and then another. With elections to Parliament in full swing, suspicion falls on members of one political party trying to eliminate voters from the other party. But Titus and his friend, Dr. Luke Fidelis, find evidence that adds to the complexity of the cases, even as they deal with the problems of a near-riotous election, a pompous mayor and a cantankerous sheriff.

Robin Blake is the author of acclaimed works on the artists Van Dyck and Stubbs. He has written, produced, and presented extensively for radio, is widely published as a critic, and has been a Royal Literary Fund Fellow at Brunel University. A Dark Anatomy was the first in this historical series featuring coroner Titus Cragg; Dark Waters is the second.

The story resonates with charm and skullduggery as it transports the reader to the simpler life of an 18th century British town. Everybody knows everybody, but some hold secrets that, when discovered, lead to stunning outcomes.