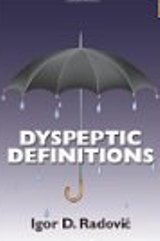 One Reader’s Opinion Based on Personal Background, Education and Experience

definition n: a brief explanation of a word or phrase, often limited to standard use considered appropriate by social conventions

dyspeptic adj: 1: a condition of impaired digestion 2: a morose disposition, often caused by the indigestion

Dr. Igor D. Radović n: 1. a highly educated individual with a considerable amount of life experience from around the world, including early French and Yugoslavian education, work in Western Europe and South Africa, a doctoral degree in Industrial Engineering and Management from the United States, a director at the United Nations, and more 2: author of Dyspeptic Definitions and the online Aphorist’s Corner Weekly

“words n: 1: terms that shape opinions and feelings no less that they describe them 2: communications making different impressions depending on whether they are spoken, heard, or read.”

Dyspeptic Definitions n: 1: an alphabetic catalogue of aphorisms, centered on a particular word or phrase 2: insights, ranging from short fragments to larger compositions 3: often an unveiling of the true implication of a word or phrase rather than the commonly accepted definition 4: almost always strong opinions about a wide variety of subjects, but generally on how people relate to themselves, others and the world 5: observations, often sober, cynical or snarky social commentary but occasional attempts at humor and satire 6: short bites of philosophy most likely intended to alter the reader’s perspective on preconceived notions or beliefs, or at least to be reflected upon 7: it is unclear whether these expositions are the result or cause of melancholia and indigestion, or if it is cyclical in nature 8. a discourse better parceled into small doses rather than one large serving 9: can be likened as a modern kindred compendium to the The Devil’s Dictionary by Ambrose Bierce with new witticisms and barbs for fans to enjoy or an expansion on the amusing but piquant societal critiques by Oscar Wilde so commonly quoted by writers 10: overall, an intelligent but pessimistic point-of-view on human nature and life.