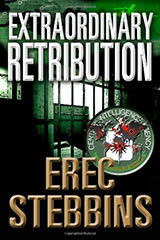 Black Ops, Retribution and a Choice: Safety or Our Freedoms?

Everyone has skeletons in their closet. Some are lies and half-truths that would hurt people but wouldn’t devastate. Some are just embarrassing. Other closets, though, hold secrets that would destroy families, rip apart friendships and decimate communities. Extraordinary Retribution is a tale of one of those closets and what people will do to keep their secrets.

When a sibling is murdered in a gruesome fashion and the police cover it up, how is justice meted out? Readers will get the answer to that question and more in this gripping thriller that will push the boundaries of right and wrong. From the very first page, the reader is drawn into this complex world and made to contemplate what far reaching consequences can stem from actions taken years ago.

Erec Stebbins creates a world that could easily be our own. It’s not a secret that there are Black Ops assignments throughout the world. They wouldn’t be Black Ops if they could be completed through traditional channels. However, this book takes it one step further. The reader is taken out of their safe assumptions of life and thrown in the midst of the devastation that can happen. Lives are destroyed beyond repair, countless numbers are murdered (some just because they were in the wrong place at the wrong time) and faith in God and country is shaken.

“After what seemed like an eon, he became aware of his surroundings once more. He lay on his side, strapped to a chair, on top of a dead man he had just killed with a nail.”

Stebbins does a great job of giving the reader just enough information for them to follow along while keeping the juicy stuff for the end. The shifting point of view, from Sara and Francisco, to Nexus and his gang, to the wraith hell-bent on revenge, gives the reader a multi-sided glimpse into the tangled web that was woven years ago. Interrogations and assassinations fueled by fear, murders to end mental suffering and pain and a quest to seek answers and get justice are all combined in this action-packed story. No character is all good or all evil. They each have their motivations and beliefs and while the reader will not agree with all of them, they are understandable. The back cover of the book says it best – “Sometimes evil is not born of madness, but madness of evil.”