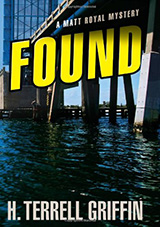 Matt Royal, a retired attorney living on Longboat Key, Florida, and his girlfriend J.D. Duncan, a detective with the local police department, are pulled into a dangerous investigation when an elderly man is murdered. Around the same time, J.D.’s friend from college sent her a text with a photo of herself, which was puzzling, since she had been missing and presumed dead for two years. She had disappeared the same day her husband was murdered. When Matt jumps in to help J.D. find her friend, they both find themselves in danger. First, thugs threaten Matt, and then attempts are made to kill both of them. Meanwhile another elderly man disappears, and the case becomes tangled when a killer is found with papers from a German submarine sunk in the Gulf during World War II. Matt’s friend Jock Algren, a shadowy operative of the U.S. government’s most secret agency, arrives in town for a visit, and quickly becomes involved in the situation.

H. Terrell Griffin, author of seven other Matt Royal novels, has been frequently compared to John D. MacDonald. The eight May Royal mystery-thriller books are all a series, but each can be enjoyed as a stand-alone novel. Found is an exciting addition that will keep the reader engrossed to the end.