Inventing the American Guitar: The Pre-Civil War Innovations of C.F. Martin and His Contemporaries 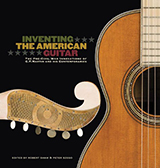 Martin Guitars remain among the most sought-after acoustic steel string guitars today, one hundred eighty years after C.F. Martin began making them. This is not a book for the casual guitarist, but a detailed history of how Martin and his sons transitioned their Viennese-German gut string guitars into today’s quality steel string instrument.

There are dozens of color photos of guitars dating back to the early 19th century. The photos are not only head-on guitar photos, but examine inlay patterns, changing styles of headstocks, and the change in the way Martin braced its instruments. As Martin changed his designs, he moved towards the way guitars were made in Spain, initially influenced by a Spanish concert performer named Madam de Goni. De Goni came to America with her Spanish-made guitars, and Martin proceeded to revise his bracing patterns and other aspects of the instrument.

There are eleven separate articles in the book, all written by authorities and careful researchers.  Readers should be aware that the book is really about the evolution of Martin Guitars, and describes the way Martin Guitars were made, distributed, and sold, in the 19th century. In addition to the descriptions of Martin instruments, there is some discussion of the guitars made by his competitors, especially James Ashborn. It is worth noting that Martin is the only company that survives to the present day, still owned and operated by the Martin family.

This book is a great present for the serious guitarist or aficionado, especially one who is a fan of the Martin guitar.