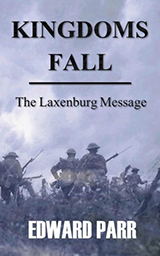 Historical events take on more depth when presented through the eyes of identifiable characters. Edward Parr’s historical fiction features breathtaking scenes portraying real events from World War I in his Kingdoms Fall series. The Great War was a game changer for the great nations of the world. The inevitability of a global war was a blow to the monarchical ruling system in Europe. New weapons and combat techniques were created and changing alliances dissolved borders.

The Laxenburg Message, the first book of the Kingdoms Fall series, follows the genesis of British Intelligence Agency spies. Regarding British intelligence before the Great war, Parr says, “None of them could do what needed to be done – indeed none of them had ever fired a weapon in combat or fought hand-to-hand with knives or hidden in dark places. A new sort of man was needed.”

With the 1915 recruitment of David Gresham and James Wilkins to British Intelligence, an unlikely partnership was formed. Wilkins was the newly recruited, clean cut colonel who spoke three languages fluently. Gresham was his battle worn, creative counterpart. These characters seem like realistic precursors to James Bond. They are tangible heroes playing out their small but significant roles in aiding the war effort.

Told in competent descriptive detail and broken down by location, the story is easily addictive as the reader is caught up in some remarkable events. Non-stop action drives the story to its conclusion and it avoids feeling like a history lesson even though it is historically based.