“‘Why should I believe you?’ asked Kravenko. ‘Because I deliver results.’” 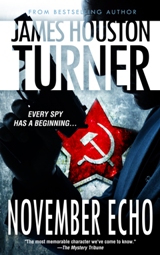 November Echo is the next of James Houston Turner’s Aleksandr Talanov thriller series books. The first book in the series, Department Thirteen has won several book awards in the 2012 and this one is also thrilling. This time the tall, handsome and sexy Talanov with his new partner, the beautiful Sofia Dubinina is going to the Costa del Sol, Spain. They are on a mission to find and bring back to the Soviet Union Dr. Yefim Gorev, a Russian scientist who is trying to defect to America with his family.

This fictional story, based on real facts and inspired by an actual KGB agent, is really engaging. It’s dynamic and moves fast. 1985, Dr. Gorev works at a secret biological weapon facility that no one in the West knows about. Many factors have brought him to a decision to flee the Soviet Union. Besides the family, Gorev carries with him deadly samples of anthrax. First it seems that Talanov’s mission is going smoothly. Talanov successfully discovers the secure place of the meeting between Gorev and American agents and arrives there in time. But in the most critical moment the events go awry… The action begins: people, supposed to be friends become enemies and the help comes from those one would never anticipate.

Turner is a skillful author and the general description of the Soviet Union reality is accurate. However, some of the Russian names sound strange and even don’t exist. Obviously, it’s up to the author to name his characters, but in the girl’s case it should be, at least, Noyabrina not Noyabr because Russian names as any other nouns have a gender. But these minor issues don’t disturb an overall impression of a very compellingly constructed plot. Readers will be caught by the swirls of events and rapidly changing situations. This is an exciting read and the intrigue will hold the reader through to the end, although this time, Aleksandr Talanov delivers some unexpected by Kravenko results.