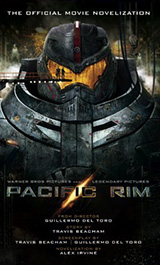 This novelization shows the epic, aliens-from-the-ocean smashing film that underwhelmed the pockets of its creators and producers this summer as a fast-paced character-driven story, based around the broken Raleigh Becket, the desperate fan-boy Newt Geiszler and the proud Stacker Pentacost.

Pacific Rim is set in a world where aliens called Kaiju have come from a rift in the deepest part of the Pacific ocean, and attack every city near the Pacific. The humans respond might with might and Jaegers, giant machines operated by humans, are created to fight the threat.

While the action sequences of the book read in a disjointed, confusing jumble, the core of the story allows the characters to grow and develop in a way that the screen does not. We are able to see more of their backstory and understand the motivation behind their actions.

In between chapters we see news clippings, dossiers, and reports that exposit the story in a unique way that is fitting to the style of the narrative. These beautiful additions allow us to see into the characters from neutral perspectives, which constantly breathe fresh life and gives excellent background.

This character-driven story develops strong relationships, delivers flawless descriptions of beautiful scenery, moving emotions and driven relationships that reveal the fearful nature of a humanity confronted by the possibility of extinction by destruction from another world.