Shot All to Hell: Jesse James, the Northfield Raid, and the Wild West’s Greatest Escape 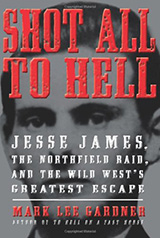 Frank, Jesse James, and their gang have been the subject of quite a few fiction and non-fiction books, as well as numerous movies. Gardner focuses his attention on the failed Northfield Bank Robbery. This was the one instance where the James gang was out-smarted and out-maneuvered by its “victims.”

Gardner offers details on the strategies of the gang, which enabled them to pull off numerous robberies of banks and railroad trains, and seemingly to disappear into thin air. At Northfield, they encountered a group of townspeople who had readily available weapons, and knew how to use them. Because one of the Younger Brothers was seriously wounded in the attempted bank robbery, the James Brothers moved on and left the Younger Brothers to fend for themselves. Inevitably the Youngers are captured, but the most astounding part of the book describes how a posse of a thousand men allowed Frank and Jesse to slip away. Gardner documents how the Minneapolis and St. Paul police chiefs behaved like narcissistic amateurs, at each other’s throats, and were unable to capture the outlaws. After disappearing while still on foot, the James Brothers steal a succession of horses and manage to subsist on what food they can beg or purchase from isolated farmers.

The end of the story is one of the most celebrated aspects of the legend of Frank and Jesse James. The notorious coward Robert Ford, assisted by his brother Charley, murdered Jesse. The author does not mention that Robert himself was killed in a barroom encounter in Creede, Colorado, but possibly that will be dealt with in a future book. Although Gardner presents detailed and intriguing portraits of the James and Younger Brothers, he has little to say about Annie or Zee James, Frank and Jesse’s wives.

Frank James was never convicted for his crimes. Gardner notes that Frank had “pulled off his greatest escape-this time from justice.” This well-written book is recommended for western history buffs, or those interested in these classic American outlaws.