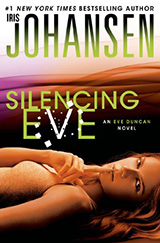 Kidnapped Woman is the Key to Solving a terrorist plot

The final installment of Iris Johansen’s 2012 trilogy, Silencing Eve is a breath-taking ride. The first two installments, Taking Eve and Hunting Eve built the stunning suspense. That suspense is built upon in this book. Opening with a funeral, then a shocking secret, Eve’s family and friends experience a frightening journey to find Eve’s kidnapper and stop the terrorist destruction he has planned.

Number 1 New York Times bestselling author Iris Johansen has long been known for creating unforgettable characters and suspenseful plots. Some previous works include Sleep No More, Close Your Eyes, and What Doesn’t Kill You. Taking Eve was the first in a trilogy in which Hunting Eve was the second and Silencing Eve the conclusion.

This final installment of the trilogy is a tale of revenge, fear, terrorism and suspense. New characters are introduced that enhance the complexity of the mystery and add to the danger. Silencing Eve builds to a very satisfying conclusion at the end of an intense and explosive story.