The Autobiography of Jack the Ripper: In His Own Words, The Confession of the World’s Most Infamous Killer 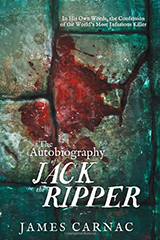 Has the Greatest Cold Case in History Finally Been Cracked?

Many of us have heard of people finding treasures in their attics and estate sales, but few of us ever stumble upon one of these wonders. In 2007, the owner of Montacute TV Radio Toy Museum received a phone call from a woman who happened to be the niece of S.G. Hulme-Beaman, the creator of “Toytown”. She had a collection of her uncle’s things that included desirable items for the toy museum owner such as original paintings of the Toytown characters, a first edition copy of Tales of Toytown from 1928, and various other Toytown related items and an assortment of other first edition books from the beginning of the 20th century. Immediately intrigued, the museum owner agreed to purchase the items practically blind. Though he originally believed the price to be too high, the museum owner would soon bite his tongue as he removed what appeared to be a weathered unpublished manuscript that “depicted a pool of blood that trickled onto a grey cobbled street”.

It is up to you as the reader of course to decide if they believe this original manuscript, The Autobiography of Jack the Ripper, to be true or not. Has the greatest cold case in history finally been cracked? We will never truly know.