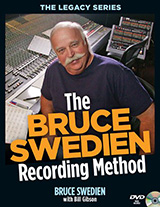 If you have spent time in recording studios, or aspire to do so, this book is essential reading. Bruce Swedien is most famous as the recording engineer for Michael Jackson’s massive hit album Thriller. Examining the list of his recording credits, the reader will discover that this man has recorded music in virtually every genre.

Although the title of the book implies that it is a textbook, it is really much more than that. Both in the text and the accompanying DVD, the reader will discover that Swedien has a passion for music that exceeds his considerable technical abilities. He stresses that his emphasis lies in microphone placement, and his choice of microphones. He is openly sketpical of engineers whose work is based on using technical aids to attempt to bring inferior artists into the pop marketplace. Swedien is conservative in utilizing such devices as compression and the multitude of plug-ins that are currently available. Rather he prefers to focus on an artist’s performance, and the music. The fact that such a successful engineer operates in this manner will probably be a revelation to many younger engineers, who are so reliant on these tools.

For those who are in the engineering trade, Swedien provides extensive information on how he records classical music, jazz, and major pop artists. This includes his mixing techniques, the specific microphones he uses, and a variety of details about some of his most famous recording sessions. The DVD serves to humanize the book, and includes some recollections of Swedien’s attitudes in the studio by his wife Bea. Swedien recorded one song specifically for this book, and he describes how he recorded and mixed it. Throughout the book QR codes appear, which enable the reader to find websites on a smartphone or tablet computer.

Although the book is of some length, I found myself wishing that the author had included even more details, especially about how he worked with music arrangers like Quincy Jones, on bringing their vision to the medium of recoding sound. I would also have welcomed stories about working with musicians and talent that were not meeting the author’s high standards. Of course that would be a whole other book!