The Inquisitor’s Wife: A Novel of Renaissance Spain 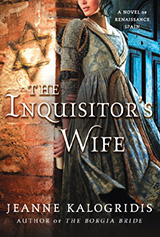 The Inquisitor’s Wife delves into the tumultuous time in 1481 at the start of the Spanish Inquisition. Marisol is the daughter of a conversa, who is quickly married to Gabriel, a civil prosecutor working for the Inquisition in the hopes that he will protect her. As the situation in Seville gets more dangerous, Marisol intimately learns about the cruelty of the Inquisition and the lengths the officials are willing to go for more wealth and power. Discovering the secret world her mother was involved in, Marisol must make a choice, but following in her mother’s footsteps could have deadly consequences.

“We have more than enough evidence to convict your father and sentence him to death. But you could change that – and save your own skin as well – by gathering evidence against don Francisco.”

The Inquisitor’s Wife begins with Marisol’s marriage, and is interspersed with pertinent information about her past, her relationship with her mother, and the love that left her. Marisol’s confusion and rising fear at the injustice she sees caused by the Inquisition is haunting. The book is well written and draws the reader in from the very first page. Fans of historical fiction will truly enjoy The Inquisitor’s Wife as it captures the essence of fear and tension for someone living during such an uncertain time.