The Men Who Lost America: British Leadership, the American Revolution, and the Fate of the Empire 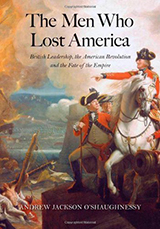 What You Never Learned About the Revolutionary War in School

American Public Schools have a lot of faults (they have a lot of pluses too but I’m not writing about them today) one of them being the vast scope of the history they are required to impart to students in a very short span of time. This constriction of time and events into mere paragraphs tends to leave details out, it turns humans into archetypes and tends to view the past in light of the transient present, as if somehow today imposed itself on the past in order to ensure it would happen. Contingency is forgotten. This is most obvious in teaching of the Revolutionary War, where King George III and his Cabinet are portrayed as pulp villains and the founding fathers as Übermensch who defeated an evil empire and birthed a nation – the greatest nation. This narrative serves its purpose in indoctrinating American Citizens but it gives short shrift to the actual men behind the conflict on both sides of the war. This is even truer for King George and the people in government who were tasked with keeping the Colonies within the Empire and who since the birth of the USA have been blamed and castigated for the loss.

“British victories, however, merely served to reinvigorate the revolutionary cause. They stimulated recruitment in the militias and the Continental Army. They stirred pamphlet writers and propagandists to sharpen their rhetoric. They created greater unity and greater willingness of the states to cede powers to the Continental Congress. In 1780, British successes at Charleston and Camden helped stir a national movement…”

Andrew O’Shaughnessy’s The Men Who Lost America is an attempt to portray these men as they have previously not been. Some of these men Americans will know from their schooling; Cornwallis surrendered at Yorktown, Clinton who helped take Boston and took Charleston. Some of them like Lord North who led the Parliament during the war and Admiral George Rodney are unknown to Americans but played major roles in the war. O’Shaughnessy casts a fair light on these figures letting the reader see them and the times they lived in, he admirably highlights their successes and difficulties while also showing their failings.

I hope that this is the first of many new books that allow these fascinating, complex, conflicted people to step out from their typecasting so that we might see them better and see ourselves and the beginnings of our country better as well.