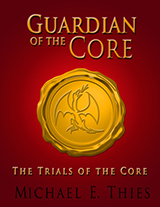 Those who assume the title of Guardian protect the universe of Gladonus and the secrets hidden at its mysterious Core. As present Guardian Eska finds himself nearing the end of his tenure, he seeks an apprentice to train to carry on the duties of his venerable position. That is where Michael E. Thies’ debut novel The Trials of the Core, the first in what will be his Guardian of the Core series, begins.

The gradual development of the characters is perhaps the most enjoyable aspect of this novel. The warrior Zain is quite compelling as he must overcome the guilt that internally ravages him. He supposedly killed his best friend Zakk, another competitor in the titular trials to evaluate the abilities of Guardian Eska’s potential successors. These trials range from physical to cerebral in nature and force characters to work either with or against each other. Observing how their individual values and cultural identities clash is quite interesting.

“The toughest trials test you truest.”

Another enjoyable facet of the story is that it is mostly self-contained. Inaugural entries of book series typically run the risk of ending quite anticlimactically as their purpose is to set the stage for a much grander story. While the ending of The Trials of the Core certainly prepares the reader for a sequel, it still feels as though something significant was accomplished, which makes the overall read all the more fulfilling.

This is not to say that the novel is a flawless piece of fantasy fiction, though. There are some dialogue issues most visible in characters such as the warrior Gabrielle. Her speech is written in a very thick dialect which some readers might consider an actual chore to interpret. Additionally, while the characters are interesting, one cannot help but note how similar they are to fantasy fiction stock characters and how little is done to truly elevate them. The universe of Gladonus doesn’t include all components of fantastical science and sorcery and never really coalesces together cohesively. Still, this book is a commendable first effort from Thies and is a quick read very likely to delight most fantasy fiction fans.