The Way They See 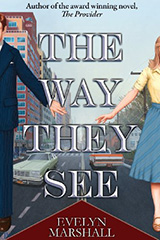 Rendered with enchanting details describing mundane activities such as putting the kettle on, “The circular blue flame puffed alive and began its jittery dance,”  The Way They See by Evelyn Marshall is a romantic tale that portrays the tragedy defined by great expectations dashed. Sam and Susannah were best friends from the day of his mother’s funeral. They grew up together in a small town called Haventon in the 1950s, both assuming that they would end up together in the big city. But when they came of age, nothing was said about feelings and they drifted apart to marry other people.

Susannah was raised in the small town but never felt as if she belonged. She made it habitable by escaping into her imagination and as a child she would bring the very driven Sam with her. Even during a stifling marriage, she took imaginative journeys which showed through in her little acts of defiance. She once mail ordered eggplant for dinner, built a zen garden in the back yard and listened to opera late into the evening. Sam, on the other hand, achieved all that he ever worked for, escaped the small town, married a seemingly perfect woman and had a successful career. Once he slowed his monumental climb to success, he looked around at his life and began to wonder if it was what he ever really wanted for himself.

“Inside her head, Sam why didn’t you take me with you? Inside his head, Susannah why did you turn away from me?”

Beyond the “love conquers all” theme that usually pervades romantic literature, this story shows that sometimes love can stifle all. A mother’s love drives a daughter into a world she doesn’t want for herself. “My mother, Dillie, shares with me a rhapsodic passion for another kind of life. Just look at this zen garden. I ask you, how can a person resist her? She creates a whole world for me that’s irresistible. I worship my mother. I believe in what she says. And yet, I don’t know who I am. I only know who she is.” And a father’s love drives a man away from his one true love. Still, these characters admit that their parent’s love is the foundation on which they have built their self worth.

It could be a simple story about small town life pinned up against the glamour of the big city, but so much more is at play in the pages of The Way They See. It is about finding that one place in a society or a family or a small town that a person can belong. It is about taking an active part in life and speaking up about what you really need in order to feel fulfilled in this life. Time and again, the characters fall into the trap of trying to live up to the dreams others have for them.

The Way They See brings to life characters that could be you or could be your best friend. Whatever their deficits, they are worth rooting for and their story is one that will make you smile.