Xor: The Shape of Darkness 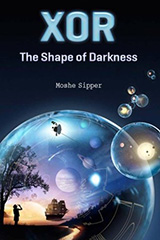 The Shape of Things to Come

Author Moshe Sipper is a professor of computer science. He works in the area of artificial intelligence. He’s a smart guy. He understands things that most of us don’t. And these “things,” they inform the bulk of Xor: The Shape of Darkness, Sipper’s young adult sci-fi powerhouse.

Lewis Nash lost his mother when he was eight years old. The loss has weighed heavily on him for four long years. And then, on his twelfth birthday, Lewis notices something strange: he’s morphing. His shape is changing, he’s becoming something he isn’t—and in a very real, not metaphorical sense—he has to concentrate very hard to return to his normal state. Talk about strange. Even worse, when Lewis returns home from school, he discovers that his house has exploded, killing his father. His father, the one parent he has left.

But things are not always as they seem, and Lewis finds himself whisked away to Xor, a planet both similar and disarmingly different from Earth, where he discovers that nothing he has ever known is true. Xor, not Earth, is his home planet, and his parents are Shapers, a rare breed that can change their physical shape and change the world with their minds. Unfortunately, they have been taken hostage by the Realm Pirates, a nefarious group seeking to destroy Xor, and their powers are being used for evil. And poor Lewis, having just had his world turned upside down, is the only person who can save Xor from the Realm Pirates and total destruction.

With a cast of fun characters and interesting information about AI and computers, Xor is a fun and exciting read, especially for the young adult crowd, who may be able to empathize with Lewis’ plight, although some of the scientific concepts may be a bit confusing. Fans of Sipper’s humorously clever The Peaceful Affair may be caught off guard by the sci-fi predilections of Xor and may not find it as compelling. But for fans of science fiction, especially science fiction informed by genuine knowledge, Xor is an enthralling journey into an alternate dimension where mind over matter is much more than just a cliché.