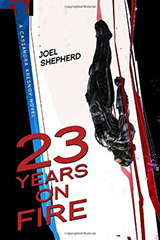 23 Years on Fire is the fourth book in the Cassandra Kresnov series by Joel Shepherd. Cassandra – or Sandy to her friends – discovers horrific atrocities committed on the Federation world of Pyeongwha against their own citizens. However, launching an attack on the world to stop the atrocities raises a new kind of trouble back home on Callay, where the politicians are uncomfortable with the Federation attacking its own people, no matter what the reason. Then, an even greater threat arises from New Torah, part of League space and on the world of Pantala, Sandy uncovers a conspiracy that show Pyeongwha was only the beginning.

“Now imagine that there’s a place out there in League space that is trying to improve on me, using unsafe technologies that could turn the next generation of GIs into psychopathic monsters. And understand that if they succeed, then not only is Callay not safe, but none of us are.”

23 Years on Fire is a fast paced science fiction novel with roots in cyberpunk technology. The pacing of the book is handled well, as periods of intense action are interspersed with philosophical discussions and politics, often revolving around the idea of what it means to be human. The characters are dynamic and fully fleshed out, and the world is full of space travel and fantastic technology. As the fourth in a series, this book may confuse readers who haven’t read the earlier books, but is highly recommended for fans of technical science fiction and cyberpunk.