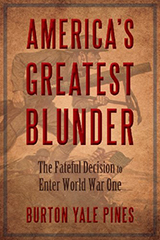 To War or Not to War?

America’s Greatest Blunder by Burton Yale Pines is a sweeping historical look at World War One and America’s involvement in it. Pines argues that by entering the war, America set in motion events that would later lead to the total devastation of World War Two. By flouting our own policies of neutrality, surreptitiously supporting the Allies before entering the war, and creating the opportunity for an all-out Allied victory, America helped set the stage for the punitive peace that came after the war.

Pines is meticulous as he sets about describing the war and all of its key players. While walking his readers through history, he lays out a rich woven tapestry, explaining different aspects of the war. Included in this tapestry is a look into American political climate and lack of military preparedness, trench warfare and Germany’s situation. Pines includes an examination of the way Britain was able to influence and even manipulate America to the point that not only were we willing to go to war for her but we were willing to make her enemies our own. To make his argument complete, Pines also gives readers a good look at how the armistice and the Treaty of Versailles were crafted and their dangerous and lasting results.

This book is a great read for any history buff, readers who are fascinated by the Great War and anyone interested in American foreign policy. Pine is careful to toe the line of history. When he is speculating he calls is speculation. When there is a point that could be argued from different directions, he is careful to give each point of view fair credit. Pines’ meticulousness can get the better of him as he sometimes belabors his points and carries on well after he has articulated the facts. But this is an easily overlooked fault. The book offers such an interesting wealth of information.