Annie of the Undead 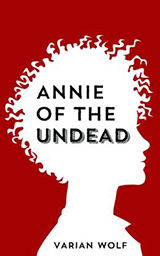 A Different Take on Vampires

Varian Wolf’s Annie of the Undead opens with the narrator Annie at a dead end. She is a former semi-pro boxer who has lost any chance at a career because of a stint in jail. The book opens on the night of her release. She has no place to go and no one to see. On her first night of freedom, she breaks into her dead brother’s ex-girlfriend’s house and gets into a couple of fights. Just as she realizes how dire her situation really is, a vampire named Miguel shows up. He takes her to a hotel room and she saves his life when a company of witches attack. Full of gratitude, Miguel whisks Annie off to New Orleans and she begins the process of becoming a vampire herself. But just as Annie is pulling away from humanity, she meets a British student studying at Tulane. Yoki Hayashi and her “force of nature” personality starts to draw Annie back to humanity and helps her reconnect with others.

Wolf’s vampires are dark, dangerous and have many of the trappings of contemporary vampires (notably the seemingly unlimited wealth). Readers who think modern television vampires have been over-romanticized will appreciate Wolf’s restraint. However, if you found this story on TV, it would definitely be on HBO. There is quite a bit of fairly graphic violence in the book. Take Annie, the boxer who feels most at home in a gym or in a fight, and add all those blood-sucking vampires. The language is also graphic. So readers who are offended by swearing or are turned off by violence will do well to look for a vampire tale elsewhere. However, readers who are looking for a real story of supernatural redemption will appreciate this book, hard edges and all.