Appletopia: Media Technology and the Religious Imagination of Steve Jobs 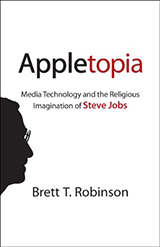 From the description of New York’s Fifth Avenue Apple Store in the Introduction to the paradox of media technology in the Conclusion, Appletopia: Media Technology and the Religious Imagination of Steve Jobs immerses the reader in the world of Apple’s marketing images. Brett T. Robinson’s background in marketing, mass communication and media serves him well as he describes how the images and imagination used by Apple, particularly with Steve Jobs at its helm, have affected the world.

“The mythos popularized by Apple found its way into the rhetoric of other communication technology companies as well. Verizon’s tagline in 2011 was ‘Rule the Air.’ The mythic tone of this slogan conjures images of Greek gods or something darker. In the Bible, Satan is referred to as ‘prince and power of the air’ (Ephesians 2:2).”

As he narrates the storyline of these representations, he also illuminates the similarity in images and patterns to a variety of mythic forms. According to Robinson, Apple’s technological influence has been significantly bolstered by the manner in which it has presented itself in the mainstream market. Other technology companies have taken the marketing cue from Apple, which ripples its effect into the wider world. The book is coherent, well written and thorough in its research. It is a thought-provoking read.