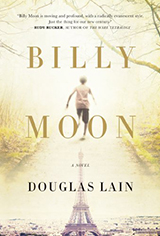 Portland author Douglas Lain blurs the lines between history, fiction, reality and dreams in Billy Moon, a re-imagining of the life of Christopher Robin Milne juxtaposed with the occupations May 1968 that began at the University of Nanterre and spread to the Sorbonne in Paris, France. In the book, odd things happen to Milne: stuffed cats appear to be alive, posters from the future suddenly appear in his bookshop and he receives letters from a Parisian student, which compel him to travel to France and ultimately become involved in the ensuing riot with Gerrard who has difficulty separating dreams from reality and Natalie who is attempting to live out the plot of Bonjour Tristesse.

“Dedicated to the spirit of 1968. You reappeared briefly in 2011. I’m keeping a candle in the window for you.”

An interesting premise unfortunately cannot sustain the flat characters, bland writing and confusing narrative. This is a book about questioning reality, the way we live our lives, misconceptions and social duty, but it is no small feat to write about a French revolt. In the shadow of the literary masters, Billy Moon cannot begin to measure.