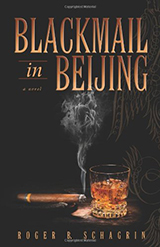 Honey Trappin’ Her Way Into History

Honey traps. Yeah, you know. Beautiful women used by their governments to bring down powerful men through the power of, well, sex. So cliché, so effective. Ambassador Daniel Harrison has never fallen victim to anything of this sort. A successful businessman prior to embarking on a career in politics, he has been married for three decades and has never strayed. That is, not until a trip to Beijing where he plans to meet with the Chinese trade minister. During a late-night stop in his hotel’s bed, Harrison meets Sue Chang, a beautiful American business woman who uses her powers of seduction to, well, seduce him into an alarmingly graphic sexual encounter that occurs far too early in the novel (page eight, to be precise). Problem is, Chang isn’t her real name, she’s not an American and she sure isn’t a businesswoman. She’s a spy for the Chinese government. When photos of he and Ms. Chang mid-coitus are produced during his meeting with the Chinese trade minister, Harrison realizes he may be in hot water.

These are the events that set in motion Roger Schagrin’s Blackmail in Beijing, a political thriller featuring a plethora of details regarding Chinese currency manipulation and the WTO. Some of the political details in the novel seem heavy-handed and unnecessary, like the minutiae could be done away with and the point would still come across. Likewise, some of the characters ring one-dimensional. Harrison, for example, while concerned about the ramifications his infidelity will have on his stale marriage and the country as a whole, does not seem to have a well-rounded emotional life, which makes the character overall a bit flat. Similarly, his wife is unrealistically obsessed with fashion and getting their successful CIA-employed daughter married before she’s an “old maid.” Are women really like this? Your intrepid reviewer does not know of any who are quite so shallow.

On the whole, however, Blackmail in Beijing is a solid novel for fans of government thrillers/international hijinks. It is a slim novel and an easy read, providing entertainment with political and international intrigue without requiring advanced knowledge of international politics. Now if only that sex scene were thirty pages later in the book…