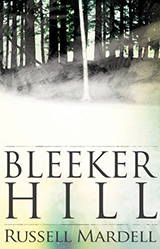 A Dark and Disturbing Dystopian Tale

Sullivan’s world is bleak. For the past five years he has been in prison for shooting an intruder in self-defense. Sadly, the shot also killed his young daughter. Sullivan knows little of what is happening in the outside world…but everyone in prison has heard of The Wash. Prisoners are taken from the facility and experimented on. No one knows exactly what happens because those who are taken never return. So begins Russell Mardell’s Bleeker Hill.

Sullivan’s fate changes when he is taken from his jail cell and given new orders to be a soldier of The Party. This new government controls the lives of all citizens. The players and the policies may change but The Party never does. Sullivan and the small group of men he joins make their way to a safe house known as Bleeker Hill. The safe house is the place that everyone fears but no one speaks of because it is the site of The Wash. The group meets Mia, a young recruit who is the sole survivor of a clean-up unit. Mia is terrified and terrorized and warns the men. Despite her warnings, the group remains. They soon discover that the truth about Bleeker Hill is worse than the rumors. Will they make it out alive?

“The Party loves you.”

Bleeker Hill is a dystopian horror novel written by author Russell Mardell. It is even darker than most. The world he has created is a dismal place where people are important only in relation to how they can be used by The Party. Most people have lost hope and have come to accept the world as it is and that acceptance leads to a slow loss of their humanity. The character of Sullivan is different than most people in that he has managed to retain his beliefs about right and wrong despite his harrowing prison experience. Mia is an innocent and naïve girl who has yet to be corrupted by the world around her. They are the most interesting characters in the novel and are both well developed. The two main antagonists, Kendrick and Maddox, are also well developed by Mardell and are highly dangerous in their own ways. Maddox uses threats of sexual violence and death and Kendrick uses mind games. The rest of the characters are unmemorable and seem to serve only as devices to move the story along. The first part of the book may be difficult for readers to connect to but once the story moves to Bleeker Hill it becomes a book that readers will have to finish. Bleeker Hill will delight fans of dystopian literature.