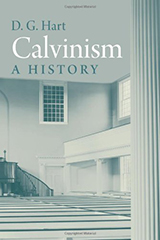 D.G. Hart’s Calvinism: A History is not just a history of Reformation leader, pastor, and theologian John Calvin. Hart’s volume spans a 500-year stretch of Reformed Protestantism, discussing the political, social, and religious atmospheres at play. Hart begins in early sixteenth century Zurich and Geneva, considering Calvin’s unlikely rise to importance as pastors sought to reform the church in Geneva, and traces the spread of Calvinism internationally, particularly through ecclesiastical traditions in Scotland, the Netherlands, Germany, and the United Sates.

“On the eve of its 500th anniversary, Calvinism attracts adherents and inspires churches in settings as diverse as Lausanne, Seoul, San Francisco, Sydney, and Brasilia. None of Calvinism’s original leaders could have predicted or planned the outcome of their initiial efforts to reform Europe’s churches. Even if it is not responsible for the blessings of democracy, liberty, and prosperity, in its own way Calvinism’s history qualifies as remarkable.”

While dense, Hart’s discussion is astute and will appeal to those interested in tracing the growth of Calvinism, the branch of theology that bears Calvin’s name and that informs such Reformed denominations as Presbyterian and Congregational. Consider, for example, Hart’s discussion of Calvin’s initial resistance to be called back to the Geneva debate: “‘If you desire to have me for your pastor, correct the disorder of your lives.’…That confrontational style would characterize Calvin’s time in Geneva for most of his career, though by the time he gained citizenship in 1559 his call for consistency between institutional reforms and personal conduct had just begun to take shape,” Hart acknowledges the controversy of Calvin’s unwavering demands on the church and does not limit his analysis to the West; Calvin’s influence is seismic, Hart argues, affecting churches as far reaching as Indonesia, Seoul, and Sao Paulo.