Dancing the New World: Aztecs, Spaniards, and the Choreography of Conquest 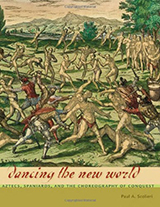 Dancing on the Edge

The conquest of the Aztec Empire by the Spanish Empire is one of the saddest moments in history, a proud people taken over by another group of people that were interested more in their gold, jewels, and labor than anything else. The story of the conquest has been told many times, from many different points of views even when the conquest was taking place many books came out about it. In this work, Paul Scolieri looks at the role of dancing in the Aztec Empire, and how it was described, changed and controlled by the new Spanish authorities. Mr. Scolieri critically reads the surviving sources to examine the role of dancing played in the life of the Aztec Empire, how the Spanish conquers interpreted the role of dance, and then finally the Christian missionaries and how they used dance to convert the Aztec Empire to Christianity. ||While this book has many strong points it does have a few weak points. First, at times it gets distracted from its main arguments and talks about the lives the individual writers led. That might be important at times, but for this work it took up valuable writing space. Second, at times it felt the author was reaching in trying to prove his argument, without reconciling the sources. A good attempt nonetheless.