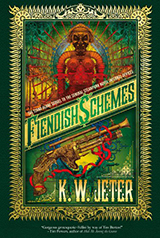 Fiendish Schemes by K. W. Jeter follows the completely overwhelmed character of George Dower. Mr. Dower, son of the genius inventor, had been living a reclusive life in rural England. Returning to London in the hopes of improving his impoverished state, Mr. Dower finds the city to have been much changed. Mr. Dower is hurled from one dangerous scheme into the next, desperately trying to understand this new steam obsessed world.

“Were it to be unveiled tomorrow that all of Humanity, once flensed of skin and other softer bits, were nothing but ticking and hissing contrivances of clockwork and steam, I confess that I would not be greatly surprised.”

This is not a book for the casual reader. Fiendish Schemes is written in the style of a true Victorian steampunk novel, complete with wordy lyric prose reminiscent of Alexandre Dumas. The book is slow paced, due to its very contemplative nature, as much of the content is connected to Mr. Dower’s observations and opinions on what he sees. Fiendish Schemes is a sequel to Infernal Devices, but stands alone, and is perfectly understandable for readers who have not read the first book in the series. Full of steam creations from the useful to the perverse, K. W. Jeter created an elaborate world that, for steampunk fans, is not to be missed.