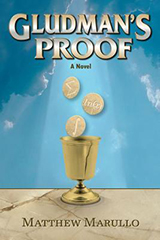 Set only a few short years in the future, Gludman’s Proof draws readers into a world filled with advanced technology, religious questions and a few dead bodies – all mixed in with human fallacies. What keeps the reader reading is just how complex but simplistic the world is. Even with all the technology (like virtual reality contact lenses and groundbreaking microbivore preventive medicine) there is still blackmail, murder and questionable morals. Although the two halves, technological innovation and the bad side of human nature, seem like such opposites they are really just two sides of the same coin. And what connects the two is investigative reporter Colin.

Marullo doesn’t let anything slip throughout the entire mystery. Just when the reader thinks they have figured out what’s going on, a twist, a turn, a revelation happens and then everything is back up in the air. There are mysteries inside mysteries and subplots become main plots and then change again into something else altogether. Readers are just along for the ride and it isn’t until the very end that everything is thrown into sharp relief.

“I’m going to bring this case to a close. If it’s the last thing I do. And Father—May God forgive you.”

The characterization of all the characters, even the secondary ones, is rich and varied. Each character has their own motivation and just when it seems like Colin has got a grasp on what makes them tick something new is revealed. An open and shut murder case becomes something more when the motivation for the killing becomes suspect. A quirky four line poem and a reporter’s drive to understand it throws readers down a rabbit hole where up is down, a Catholic parish isn’t all it seems and biopharmaceuticals are in bed with the last person anyone would imagine.