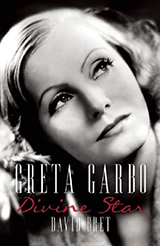 Shining a Spotlight on a Star

David Bret, the well-known celebrity biographer takes on one of the cinema’s most mysterious personalities in this biography Greta Garbo. This book focuses most closely on Garbo’s career, from her early studies at the Academy of Dramatic Arts in Sweden and her early work with Maurice Stiller through the end of her Hollywood career. Bret, with his knowledge of celebrities, is well placed to speculate on the less well-documented aspects of Garbo’s life. Historical sticklers may be slightly irritated by some of this speculation, but it is well backed up by the author’s personal knowledge of many of the figures involved, rather than blind guesses. Bret also intersperses extensive synopses, many a page or more, into the text, which can be helpful for readers who are less well versed in classic cinema. All in all this is an enjoyable and accessible biography which attempts to put some understanding and context around the still notorious actions of one of the great film stars.