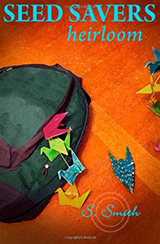 A Nice Twist on Standard Dystopia

Heirloom is the third installment in the Seed Savers series by author S. Smith. The concept of gardening being an illegal activity in this country is an interesting one, particularly in light of the growing use of processed and genetically modified foods in our diet. The concept becomes even more intriguing when a powerful company begins to systematically eliminate real food from the palates of American citizens.

The dual storylines are both intriguing in their own ways and alternate nicely throughout the book. Lily’s story is the more exciting of the two as it involves her being on the run, learning to listen to her gut, trust her friends and learn about herself. Clare’s story also parallels Lily’s in that she learns more about herself as she learns to grow food. They also start discovering boys in a refreshingly innocent way. Both girls work to find their place in the world and in the revolution that they have chosen to participate in. The book is engaging and keeps up a nice pace. The characters are well developed and will be endearing to readers. The book unveils secrets nicely and sets up more for the next installment in the series. While it would be helpful to read the first two books prior to this one, it’s not strictly necessary. Heirloom is a satisfying dystopian novel that younger fans of sci-fi will enjoy.