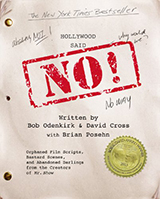 Everyone has that show they miss years after it has been cancelled. For many, that show is Mr. Show, a sketch comedy show created by David Cross and Bob Odenkirk. What fans may not know is that following the series end, the two creators worked on several scripts that went absolutely nowhere in Hollywood. This book, Hollywood Said No is a collection of two scripts and several sketches that never made it on air. The first script, Bob and David Make a Movie, gives a good idea of their style and shows that it definitely isn’t the mainstream comedy fluff that typically gets made into movies. It wasn’t hard to see why this particular script was passed over. Regretfully, their second script in the book, Hooray for America!, was also passed over. This hilarious satire of the American political system is a great script and well worth reading. The additional sketches and comments from the authors are also funny. Designed and presumably published for fans of Mr. Show, this is a great book that will not disappoint. Those who haven’t heard of the show should probably watch it before reading – it’s something they won’t regret.