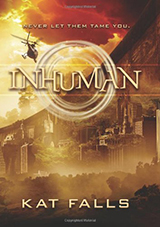 Kat Fall’s first venture into Young Adult fiction, Inhuman, starts off with vapid and privileged Delaney “Lane” McEvoy pulling teenage pranks with her friends. At first, when law enforcement shows up at the party they are hiding at, she thinks that her friends are in trouble for the party, or that she is in trouble for the prank.

Instead, Lane is unwillingly pulled into a world beyond a wall. She is sent east of the Mississippi River out into a quarantined part of the future United States where she encounters half-human, half-animal creatures that tickle and frighten the imagination. Sent to fetch an artifact, Lane must surpass monumental struggles that rise to block her path.

Lane’s character develops from being a shy, innocent party girl – trapped in her proverbial white castle – to a strong, independent woman. Yet her independence is curbed by her reliance on, you guessed it, two teenage male characters (the brash and cold hunter who will do what he has to in order to stay alive, and the warm and friendly soldier who must always do what is right) that save her at every turn, when she is incapable of saving herself.

The story moves, fast-paced, across the disease-ravaged state of Illinois, untended for 20 years and overgrown with fantastic and terrifying beasts that are a result of the disease. The book rises to a fierce and thrilling denouement in downtown Chicago, and sharply crescendos into a bold finale, setting the pieces in place for the next volume of the trilogy.