Leviticus (When We Were Gods) (Volume 1) 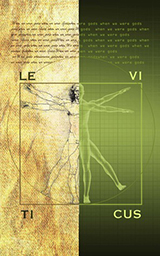 What Does It Mean to Be Human?

The biblical book of Leviticus proclaims the holiness of humanity and the way holiness connects humanity to God. In his book Leviticus, Daniel Seltzer creates a story that brings the concepts of ‘holiness,’ ‘God’ and ‘humanity’ into question. Where is the line drawn between being human and being a god? Would having the ability to create, or replicate, be a positive or negative step for humanity?

The setting for his story is the relatively near future of 2024 in a somewhat changed, yet recognizable, Chicago. Seltzer is able to weave in snippets of story content from current news events because 2024 isn’t that far in the future. The book begins with a story focused on the horrific abuses that took place in Abu Ghraib. Later in the book, there are mentions of Apple, Coca-Cola and McDonalds, companies only slightly different that those with which the reader is familiar.

Levi Clayton Furstman, known to family, friends and co-workers as Clay, introduces the reader to this future world. He is middle-aged, introspective and intelligent. His world is fairly simple. He has a job downtown, a loving wife, two children and a house in the suburbs. Technology is growing more and more pervasive as well as personal. Clay drags his feet when it comes to giving up personal freedom and independence in favor of connectivity.

“Certainly, the ability to build anything molecule by molecule had made such feats possible over a year ago when the Genesis was first developed. Why now? he wondered. And why the hush-hush? Of course, the paranoid in Clay told him it is a plan. Allow the public to become comfortable with the idea of molecular manufacturing before you really start to push the limits. Even now, a year later, the idea of molecular manufacturing is probably more than many people could really fathom if they sat down to think about it.”

Politics and personal, professional and governmental intimidation play a part in Clay’s decision-making. The reader is teased into speculating about his motivation and which steps he will take and where those steps will lead.

Seltzer’s writing draws the story carefully and steadily forward. As it begins, the pieces seem simple and perhaps a little disjointed, but the reader will be drawn to continue because of the storyline and their connection to the main character. The author’s character development is also careful and steady. Clay is a sympathetic protagonist and Colonel Leeds is a formidable antagonist. After reading this book, it is great to know there is a next installment.