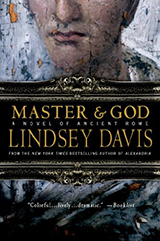 Master and God by Lindsey Davis is a historical fiction novel, taking place in Ancient Rome. After Emperor Domitian’s seizure of the kingdom under somewhat suspicious circumstances, his distrust of nearly everyone in Rome begins to unravel his rule. As those around the Emperor begin to question his sanity, reluctant bodyguard Gaius Vinius Clodianus finds himself torn: do his duty and protect the Emperor, or throw in his lot in a conspiracy to kill him in order to protect Rome herself.

Despite the large amount of political intrigue, Master and God is at its heart a romance between Gaius and Lucilla, a hairdresser to the wealthy. The characters of Gaius and Lucilla are surprisingly sarcastic and their growing attraction to each other is enjoyable to watch. Much of the narrative has to do with day-to-day living in Rome from watching gladiatorial fights, putting out fires, to making hairpieces. The writing is simple yet engaging. Master and God is a quick read for historical fiction fans, and tells a surprisingly sweet story amidst all the brutality of Ancient Rome.