Military Politics and Democracy in the Andes 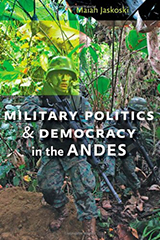 How the Military Changes its Role in Society

The role of the military in politics has a long, and checkered, history in many countries of the world. From staging coups, to interfering in politics, and often ignoring civilian leaders and pursuing their own goals. In South America the military has had a strong presence in politics over the decades, from outright rule, to following the beat of their own drum. In this work author Maiah Jaskoski explores the role of Ecuador and Peru’s armies as they explore new missions, gaining relevance, and if they follow traditional modes of military thinking.

This work is definitely for students of the military and its role in society. The first chapter mostly explores the different models of military thought, and the integration of the military into society. The succeeding chapters explore in-depth Peru and Ecuador’s military roles, and how they took on new tasks; and ignored others.

One of the downsides of this book is that it only focuses on two countries, while the methodology is good and important, the narrow focus – only two countries – is disappointing since it does not help his thesis. With so many other examples it would have been much better if another country or two of the region were explored more in-depth.